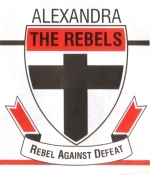 The Alexandra Rebels Football Netball Club has finally got reward for effort after the Labor Government pledged $1.79 million towards the revamping of the sporting ground’s facilities, providing the club relief after a decade of hard work funding the massive refurbishment project themselves.

The State Opposition have committed to spending $300,000 towards the club’s goal if they are to be elected, meaning the project will be completed regardless.

“I got a bit of a knee tremble and got a bit teary,” he quipped, describing his reaction the news of the Labor Party’s pledge.

Stage One and Two of the Alexandra Football Netball Club’s plan has already been finished, with the clubs netball facilities having been upgraded recently.

The next stage of the project is to construct a multi-purpose building to house the local sporting clubs and a number of community groups. They also plan on improving the ground’s lighting.

The upgraded rooms are expected to increase crowd numbers for the Rebels home games and help grow the club as a whole.

In addition to housing all of the community’s sport, the ground is also used as a refuge during disasters or major events, such as the Black Saturday fires, meaning the upgrade will make it an even better haven for locals should an event of that magnitude occur again.

This news will help create momentum heading into 2019 for the Rebels who will be looking to improve on a promising 2018 season on the football field, where their senior side finished with a 6-10 record, squeezing into the final five on percentage, over Yea and Powelltown.

The Rebels went down to Gembrook-Cockatoo in the elimination final by 20 points, whilst their spearhead Brayden Norris booted 74 goals for the season to finish second in the league goal-kicking and find himself in the Division Two team of the year.