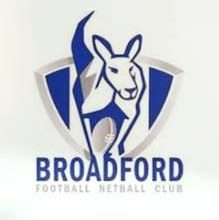 Broadford Football Netball Club President Bonnie Cavanagh says that the Kangaroos move to the AFL Outer East is a welcome return to country football for the club, after their move from the Riddell District Football Netball League was officially ‘ticked off’ by AFL Victoria earlier this week.

The Kangaroos move to the Outer East had been in the works for some time now, and the club were placed within the league’s ‘2020 and Beyond’ release back in September which detailed the newly structured Division Two, which will now see clubs promoted out of and relegated into the Division via application only.

The Outer East Commission has released details about the competition’s structure for 2020 and beyond, with details of…

Cavanagh came into the role as Broadford President in March of this year, after her predecessor, Aaron Bray, vacated the role for unforeseen circumstances. In the process she became the clubs first ever Female President.

By the time she had taken over the role discussions about leaving the Riddell District competition were well underway, with the sustainability of the clubs future the main rationale behind the movement.

“I was called upon after the discussions (about moving) had already begun,”

“Since then the conversations have been around the sustainability of both our volunteer base and our playing group,”

“We’ve been finding that currently we aren’t getting that transition of players from the Under 16’s into our Under 19’s,”

“Another reason is the fact we’re in such a strange location, as we’re on the fringe of the Riddell league, the Outer East, Kyabram and the GV,”

“In the end the Outer East model matched us perfectly, it was a no brainer.”

The Kangaroos will wear a blue and white striped jumper for the majority of their games, with a ‘Essendon style’ clash jumper to be worn when they face Thornton Eildon. The ‘Bombers’ style jumper is Broadford’s original strip.

Broadford are excited by the opportunities that lay in the Outer East. Photo – Broadford Football Netball Club Facebook

Cavanagh is immensely proud of her club however, stating that their resilience and unified approach will hold them in good stead for the journey ahead.

“The netball is a very strong and united group, under some great senior leadership,”

“It’s locally driven, as is our football department, and we are starting to see a lot of returning players.”

Cavanagh went on to point out that despite their poor win loss record in recent times, the Kangaroos footballers have won plaudits for their togetherness and enjoyment, something that can be hard to come by when sides are closer to the bottom of the ladder than the top.

“The best way to describe our footballers is that they’re a really resilient group and that they really enjoy their football,”

“You wouldn’t know that we’ve struggled recently, the feedback from other clubs is that we are a strong team,”

Those two attributes are something that are hard to come by within sporting clubs at times, derived from years of hard work, rather than instant on field success.

Cavanagh says that the town of Broadford has played a huge role in developing that strength and resilience.

“It comes from being a very united town, you see young kids growing up at the club and families returning back to the club,”

The newest team to the Outer East are not coming in blind however, with their president well aware of the competition. Cavanagh was in attendance at two of the Division Two Finals earlier this year and her partner has spent some time at one of their newest rivals.

She’s also aware that the distance between some of the other Division Two clubs and Broadford will be a talking point, but Cavanagh is confident that the Roos will fit in nicely in the Outer East and is looking forward to re-connecting with neighbouring clubs like Yea, Alexandra, Kinglake and Thornton Eildon.

“I went to the (Division Two) finals at Healesville and Yarra Glen, and my partner was actually a recruit from Yarra Junction, so he’s given me the lowdown as well,”

“I know we’ve got a few road trips ahead of us, but in comparison to when we were in the Heathcote league and we were travelling to Lockington, it’s really not that bad.”

“In the conversations I’ve had with people at the bars and canteens (at the aforementioned Division Two Finals) I can tell that we are back where we are meant to be,”

“It’s a return back to country football for us and we think we will get on really well with the people and the teams in the league,”

“Plus, I’m really looking forward to getting those bonds back up with some of the neighbouring towns as well.”