Match of the Round information – Week Eight Tune into Yarra Valley FM 99.1 from 1:30pm to listen to all the senior footy action or stream through https://yarravalleyfm.org.au/listen.html

All games recorded this season will be uploaded to ClubZone Live, an affiliate of Gameface, in 2022 and these can be seen here.

For live scores of all senior football and netball matches, download the Gameface Record app to your smart phone, or follow the links below.

Check out the eighth edition of the OEFN Gameday Record here: 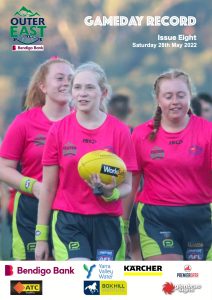