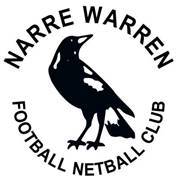 The Outer East Premier Division sees some pretty impressive clubs lining up against each other this year and few are as a strong or well run as the Narre Warren Football Netball Club.

One of two incoming SEFNL clubs who are run as one whole entity, the Magpies are coming off a strong 2018, that could’ve been so much better, as they finished runners up in the senior football despite losing just two home and away games all season.

President Stuart Stephenson states that a multitude of factors have contributed to the on-field success of the Magpies.

“We’ve had some very strong administration in recent times, and a very strong committee who developed relationships with junior clubs,”

“This saw some high quality juniors all coming through together combined with some great Narre Warren coaches and people – Moss, Jones and Matt Shinners.”

The Magpies have kept a lot of continuity amongst their coaching staff across the club, with Matt Shinners staying on for the 2019 season as Senior coach, whilst over on the netball court B Grade premiership coach Michelle Mashado has been given the role of A Grade Coach, which she will perform alongside her duties with the B Grade side.

Netball co-president Jodie McLaren was pleased with her clubs performance in 2018, with two minor premierships (B and C Grade) and one overall premiership in B Grade, whilst both A and D grade featured in the finals.

But the Magpies won’t be resting on their laurels.

“We’ve put some new coaching structures in place, with Michelle being given the A Grade job,”

“Fiona Carmichael and Linda Bourke will look after our C and D grade sides.”

Off the field, both sides have seen the benefits of joining the two clubs (football and netball).

“We’ve seen great improvements in the way people behave and the overall attendances at our social functions, which creates a great family culture.” Stephenson says when talking about the mixing between the two sides of the one club. McLaren echoes his thoughts.

“We pride ourselves on how well we get on together, we’re one big united force and it shows on the field.”

Narre Warren kick off their season with a stand alone game against Berwick, in what is a rematch of the SEFNL grand final on the Sixth of April.