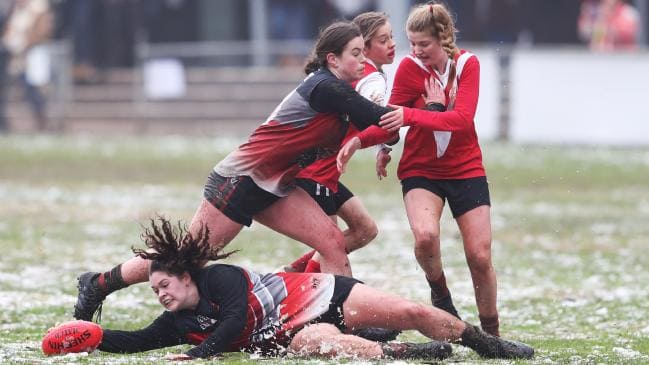 Under 18 Premier Division
Semi Final 1
Blackburn vs Mt Evelyn
Mt Evelyn have the toughest assignment in the division this weekend. They have to take on a Blackburn side that is so far undefeated this season and have won by quite big margins in many of their games.

Recent history is definitely on Blackburn’s side. In their two previous meetings this season, the margin was 64 points and 74 points respectively.

The benefit of the top six system is that even if Mt Evelyn lose, they are still a chance to progress. They just need to make sure the margin is as small as possible.

Mt Evelyn coach Andrew Clark believes the key to winning this weekend will be slowing the play down.

‘‘They like to keep the ball moving as quick as possible and are prepared to work hard for their teammates,’’

“The key this week will be to work hard, to slow their run and play on at all costs,”

“We need to not worry about what they have done so far and play our style of football, we will need to play tight all over the ground.’’

Under 18 Division One
Semi Final 2
Seville vs Heathmont
Despite last week’s stumble, Seville still finished in 2nd place on the ladder and find themselves up against 5th placed Heathmont this weekend.

These two sides have met twice this season, with Seville winning the first clash, and Heathmont winning the second clash only two weeks ago.

They are currently on a five match winning streak, and will not be wanting that to end this weekend. They come up against a Glen Waverley Rovers side whose recent form isn’t as consistent.

The sides have only met once this season, with Mt Evelyn getting the win, so they will be looking to replicate that performance this weekend.

The sides have played four times this season, with the ledger Healesville winning three out of the four games, and Upwey Tecoma winning the other match.

Healesville coach Anne-Marie Ebbels is expecting a tough match, and believes the key to getting the win will be their ‘trademark 100% effort until the final siren goes’.

Ebbels is expecting another tough encounter.

‘‘It has been an even match up in all but one of our 4 games this year, so it will be another tough game.’’

The Grand Final sees a repeat of the matchup from week one of the finals, with Mt Evelyn and Monbulk doing battle once again.

During the home and away season, these two sides have played twice, with the ledger at one win apiece. Each side’s loss in these games were their only losses for the entire season. In week one of the finals, it was a seven point win to Mt Evelyn.

Mt Evelyn coach Glen Burton is expecting an even match and will be looking for his side to keep the pressure on.

“Both sides are very evenly matched as you would’ve seen from our three clashes so far this year with the winning margins all being 14 points and under,”

“Monbulk are just a very good side who have a lot of girls that use the ball very well particularly by foot so we will have to have the pressure right on,’’

‘‘I think getting first use of the ball in the middle will again be pivotal. Our backs were fantastic in the Semi final so if they can produce the same effort and our forwards get a little busier it will go a long way to getting us over the line.’’

Under 12 Outer East
Grand Final
Belgrave Black vs Healesville
This weekend, Healesville have to try and do what no one else has been able to do all year and defeat Belgrave Black.

The sides have played three times so far this season, with Belgrave Black winning all three times, including a 47 point win only a month ago.

Healesville can take some comfort in the fact that they’ve successfully fought their way to the Grand Final, which isn’t always easy. They haven’t had a second chance available to them, and they have proven they haven’t needed one.

Belgrave on the other hand, have been the team to beat all year. They are undefeated all season, and have been able to restrict their opposition to very minimal scores in every game. The highest score they’ve conceded this season is 18 points, which was in round four against Healesville.