The first component of the Netball Victoria Association Championships took place on Sunday with the 15 & Under and 17 & Under squads taking the court and putting on a series of strong performances, as the 17’s progressed through to the State Championships in July following its victory in the tournament.

With the event taking place at the Springvale & District Netball Association headquarters, our squads were involved in tournaments of short matches across the day where they had plenty of support from family and friends to encourage them.

Under the coaching of David O’Hare, the 17’s lost its first match to Kingston and drew with Waverley later but won five of its seven tournament matches to progress through to the finals, beating Booroondara and then Doncaster in the final to bring some joy to the squad.

“It couldn’t have gone any better,” O’Hare said.

“They had no more than two training sessions together which meant the girls barely got a chance to know one another.

“With the lack of preparation the team had, we were beating teams that had played together week in, week out, so it was great to put in some terrific performances and for that I am really proud of them.”

The 17’s put in a genuine team performance across the day where all members worked well together to execute the skills and game plan needed to get the overall win.

With all players rotated evenly across and the girls responding well to the tuition provided to them, the focus now turns to regular training sessions before its next challenge at the State Championships.

“It was a terrific day of matches and I would like to thank all my players and their parents for their involvement as well as Greg Heinrich and Matt Blanchard for their support in getting the preparations moving for this event,” O’Hare explained.

I would also like to thank my team manager Mandy Gesler, as she really helped me with the administrative side of things so I could focus on coaching.

“I am also appreciative to those who coach in the OEFN junior interleague program as we would never have been able to put strong teams together if it wasn’t for their help.”

Despite losing two members of its squad before the championships began due to illness, the 15 & Under squad put in a formidable performance across the day to win six of its nine tournament matches to progress to a semi-final but lost the match to Lilydale/Yarra Valley Netball Association. 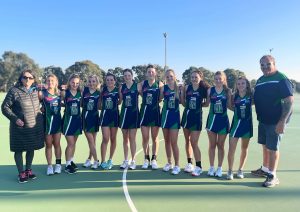 15 & Under Squad with Donna Wilson and Rob Simpson

The girls had great preparation prior to the Association Championships with three training sessions and taking part in the Frankston tournament last week.

Participating in the Association Championships in coaching duties for the first time, 15 & Under Assistant Coach Rob Simpson is also proud of his team for the effort they put in and enjoyed working with Head Coach Donna Wilson across the day.

“The girls came together really well as a team, straight off the bat, which made it fairly easy for Donna and I to coach them,” he said.

“The fact that a lot of the girls already knew each other, whether they play together as teammates or as rivals across the Casey Cardinia area helped with team assimilation and it was fantastic for my first experience in the program.

“I am grateful for the efforts of everyone over the weekend as well as Donna for taking me on as assistant coach and control the defensive end of the court, I got a lot out of it.”

The strong performances of both the 15 and 17’s squads over the weekend is a testament to the junior netball program in Outer East FN, and Netball Development Manager Greg Heinrich is also pleased with how the day unfolded.

“The way both teams presented themselves and completed tasks throughout the day leaves us incredibly proud from a league perspective,” he said.

“The key focus on the Association Championships is displaying the level of netball from within the league, but just as important is having athletes talent on show for Netball Victoria’s Talent Academy, so winning the 17 & Under division was definitely the cream on top of the cake.

“The coaching staff in Donna and Rob from the 15’s and David in the 17’s have to be commended for the way they prepared the girls and provided a platform for them to continue developing their skills and experience.”